Lord Rayleigh discovered acoustic whispering-gallery waves travelling in the air around the cylindrical walls beneath the dome of St. Paul's Cathedral more than 100 years ago. When you whisper, the sound waves 'creep' round the gallery, hugging the walls.

Here is a simulation of whispering-gallery waves in an enclosed cylinder of air with the same diameter (33.7 m) as the gallery of St Paul's Cathedral. The travelling sound waves go one way round. At fixed pitch we refer to these patterns as modes.

For this purpose we use discs of copper 40 μm in diameter (1 μm=10-6 m), embedded in a layer of silica, all on top of a slab of crystalline silicon. We generate surface acoustic waves near a point on the rim, and then scan probe-light pulses over the sample to make an animation.

The waves travel in both directions round the disc, causing the wave pattern to flash on and off. This is a snapshot of the whispering-gallery mode intensity rendered in 3D.

We have also visualized whispering-gallery waves going round a copper disc with a microscopic slot machined near its edge. In the following image and animation one can detect a secondary set of ripples emanating from a defect at about the 5 o'clock position. 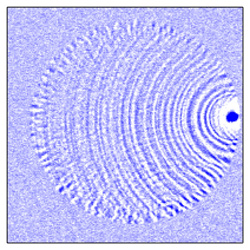 175-μm-diameter copper disc with a defect. To animate in the time domain, click the image (2200 kb movie).

The next step should be to investigate complicated geometries such as two coupled discs, chains of discs, chaotic cavities or phononic crystal resonators. For articles, see 'Gallery of whispers,' Physics World, vol. 25, Feb. 2012, p. 31 and 'Acoustic whispering-gallery modes generated and dynamically imaged using ultrashort light pulses,' T. Tachizaki, O. Matsuda, A. A. Maznev and O. B. Wright, Phys. Rev. B 81, 165434, 2010.