We use an microscopic vibrating tip mounted on the end of a cantilever to probe the mechanical, elastic, and thermal properties of surfaces on tiny length scales, of the order of 1 nanometre (10-9 m).

One technique is called Ultrasonic Force Microscopy (UFM), based on atomic force microscopy. A tip on the end of a cantilever is vibrated in contact with a sample surface at a very high frequency in the megahertz range (106-108 Hz). The force between the tip and the sample depends in a nonlinear way on the position of the tip, and we exploit this to induce a low frequency kilohertz tip vibration by modulating the amplitude of the megahertz vibration at this low frequency. Then by scanning the tip laterally across the sample and monitoring this kilohertz vibration, we can make an image of the elastic properties of the sample on nanometre length scales.

This shows an image of germanium quantum dots only 15 nanometres high on a silicon substrate obtained with UFM at 60 megahertz. We can even resolve here small changes of elastic constants inside the dots due to the high levels of strain induced during the dot growth.

An important goal of the present studies is to render these techniques more quantitative. Theoretical modelling allows us to optimize the choice of cantilever, the tip dimensions and the vibration frequency for a given sample. We are sensitive not only to elastic constants, but also to the adhesive and viscoelastic properties of solids on atomic scales and at high frequencies. For example, we have shown that the measurement of both elastic and adhesive properties is possible by monitoring the cantilever motion. (See 'Hysteresis of the cantilever shift in ultrasonic force microscopy', K. Inagaki, O. Matsuda and O. B. Wright, Appl. Phys. Lett. 80, 2386, 2002.)

We have also developed a technique to image sub-surface variations in thermal properties: Optical Heterodyne Force Microscopy (OHFM) relies on the use of a modified atomic force microscope in which light modulated at a megahertz frequency is focused onto the sample to induce thermal waves inside it. 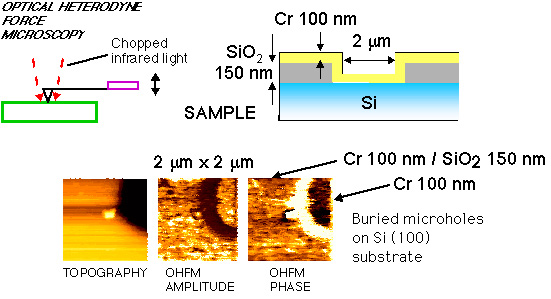 This shows an image of a buried structure. The top Cr layer hides a hole under the surface 2 microns in diameter. This is clearly resolved in the OHFM phase image, sensitive to the sub-surface propagation of megahertz frequency thermal waves.

A short movie of the OHFM scanning process is shown below.

Now we have extended this method to profiling the optically heated micron-sized spot on the sample using a modified setup. (See 'Nanoscale thermoelastic probing of megahertz thermal diffusion', M. Tomoda, O. B. Wright, and R. Li Voti, Appl. Phys. Lett. 91, 071911, 2007.) This makes use of optical incidence from the opposite side of the sample, as shown below. 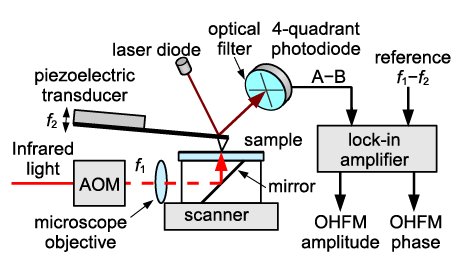 Modified OHFM setup. The sample is a thin metal film on a transparent silica substrate. AOM refers to an acousto-optic modulator that chops the light.

The AFM tip is scanned laterally with respect to the optical spot, allowing lateral thermal diffusion to be investigated on nanometre length scales at MHz frequencies.

More details are given in the List of publications.