Electrons behave like tiny spinning tops, giving off a magnetic field. We refer to this property as electron spin, which is a quantum-mechanical phenomenon. Electrons exist in all natural materials on Earth, but their magnetic effects are often cancelled out because of equal numbers of spins pointing in opposite directions.

However, even in non-magnetic materials we can magnetize them for a very short time by hitting them with an ultrashort light pulse. But until now no-one has attempted to exploit this property to detect sound (phonons), because the phonon-spin interaction was thought to be too weak in such materials.

In collaboration with coworkers in the UK, we have for the first time demonstrated how to detect very short ultrasonic sound pulses using transient electron spins.

We use a sample (see figure below) based on the semiconductor gallium arsenide containing a very thin near-surface layer made up of 20 so-called quantum wells, each one only a few nanometers (10-9 m) in width. We generate a transient population of magnetized electron spins in the quantum wells using an light pulse called a spin pump pulse.

Then with another light pulse we generate a picosecond (1 ps= 10-12 s) sound pulse on the opposite side of the sample, which travels through the sample and interacts with the quantum wells containing the previously magnetized spins. See the movie below. 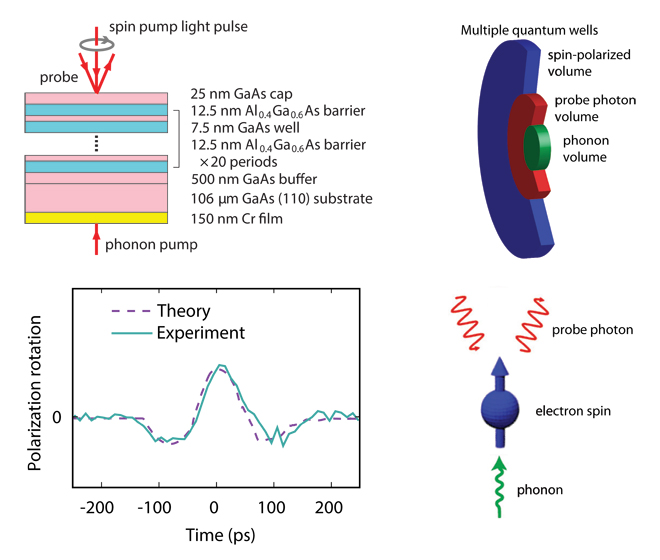 The top two diagrams show the sample and light beams (left) as well as the regions of interaction with the quantum wells (right). The bottom graph shows the results of the change in polarization direction of the probe beam as a function of time as a picosecond sound (phonon) pulse passes through the quantum wells. The diagram on the bottom right schematically illustrates that photons (light) as well as spins are required for the detection of phonons.

We then use a third light pulse called the probe which measures a tiny change in the direction of the optical electric field on reflection from the quantum wells. This probe is sensitive to the joint presence of sound (phonons) and spins, and we register a short pulse of sound (see the graph in the figure above).

Movie showing the sound pulse (its longitudinal strain) passing through the layer containing 20 quantum wells. The sample top surface is on the left at position 0.

We have developed a theory of the optical detection mechanism that explains the shape of our detected phonon pulses in the presence of electron spins (see the dashed line in the graph).

This work opens up a field of investigation for ultrafast optical modulation in the presence of both phonons and electron spins, and could lead to new perspectives in phonon-mediated ultrafast spintronic nanodevice applications.