In a joint Japan-Korea collaboration, we have used computer simulations to see what would happen when acoustic waves of wavelength 100 nm in a tungsten block meet a tungsten wire of diameter only 5 nanometers and length 40 nanometers, connected to a second block. As shown in the picture below, we also made use of a series of concentric grooves in a bullseye pattern on the first block, following the example of previous studies in fluid acoustics. 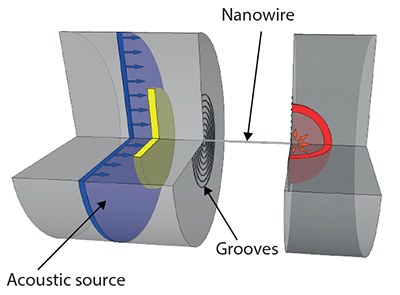 Sketch of the tungsten nanowire joining two tungsten blocks. The yellow and red regions were used for analysis of the acoustic transmission.

At a specific ultrasonic resonance frequency (50 GHz or 50,000,000,000 Hz), the amount of acoustic energy travelling through the wire was increased by a record factor of 500 compared to the value expected when only considering the rod's cross sectional area, corresponding to an enhancement of the acoustic energy density in the wire about 14,000 times.

This nanowire works as an acoustic metamaterial, meaning an acoustic resonator much smaller in size than one wavelength. Our metawire rings just like an organ pipe, but at a much higher frequency.

The movies below compare three different samples, on the left without grooves, in the middle with grooves in the first block and on the right with grooves on both blocks.

Movies showing acoustic waves in three different samples on resonance, with the nanowire shown in a vertical orientation. From left to right: no grooves, with grooves on the first block, with grooves on both blocks.

The addition of grooves, in the middle movie, results in a huge increase in acoustic transmission (note the different colour scales). The right-hand geometry produces focusing of the waves on the exit side.

Such metawires should prove useful in acoustic sensing and as acoustic concentrators.