In collaboration with coworkers in France, Austria and Thailand, we have filmed high-frequency sound waves guided in channels inside microscopic periodic structures using an ultrafast imaging technique.

Our samples are made by drilling arrays of 6-micron diameter holes in crystals of silicon, leaving channels undrilled to guide the waves. A snapshot of the surface motion obtained at a fixed frequency for an L-shaped channel (or waveguide) is shown here. 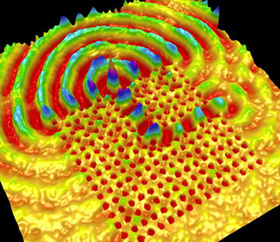 Sound waves in a phononic crystal at a frequency of 320 MHz. To animate click the image (1.4 Mb movie).

Sound is guided around the 90-degree bend because at this frequency the periodic structure — known as a phononic crystal — does not allow acoustic waves inside it.

To better understand the processes involved, we have converted our data to so-called k-space or reciprocal space.

This is done by processing a sequence of images by mathematical analysis (involving Fourier transformations) — maps of the acoustic amplitude at different wavelengths (λx, λy) depend on time.

The above movies show both ordinary space (left) and k-space (right — short for wave number space). The horizontal and vertical axes of the smaller movies correspond to wave numbers kx (=2π/λx) and ky (=2π/λy). It is much easier to understand which acoustic wavelengths get into the waveguide and which survive bending around the corner by viewing the movies in k-space.

This is the first demonstration of animating k-space in acoustics, and this method should prove useful for understanding acoustic waves interacting with a variety of structures. See 'Broadband evolution of phononic-crystal-waveguide eigenstates in real- and k-spaces,' P. H. Otsuka et al., Sci. Rep. 3, 3351 (2013).