The magic beam that won't vibrate

When Harry Potter fights Voldemort, their wands remain remarkably straight, neither wobbling nor vibrating in spite of the obviously huge forces on them. Have you ever wondered why? We have experimentally demonstrated for the first time that a beam can be constructed in such a way as to prevent all vibrations travelling along it at certain acoustic frequencies. Such a beam is an example of an elastic metamaterial or, for short, a metabeam.

Elastic metamaterials are solids made up of arrays of cells that can vibrate, and such materials show counterintuitive properties such as negative density or stiffness. These solids can damp out vibrations over a certain frequency range, giving rise to useful applications in soundproofing or vibration isolation. But so far, nobody has managed to construct one in the form of a rod or beam that can block all types of vibration at a given frequency.

We have now shown that by machining slots in aluminium, a metabeam can be constructed that blocks all vibrations at frequencies around 1000 Hz, or a note with a pitch about two octaves above middle C. 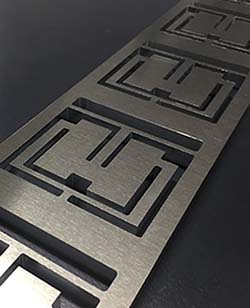 Our fabricated aluminium metabeam is 80 mm wide and 8 mm thick.

This metabeam works because each cell in the beam contains an oscillator that can vibrate in four different ways, by compression, by bending or flexing, or by twisting. These are the only sort of vibrations that this beam supports. The interaction of the cell oscillations with the vibrations moving down the rod serves to reflect all the vibrations at around 1000 Hz, forbidding them from travelling. Just as Gandalf said to the Balrog, "You shall not pass!"

Movies of showing the four ways that the metabeam cells can vibrate.

We have also developed a version with a circular cross section, a metarod made of acrylic.

Developing such metabeams or metarods of different sizes and with softer materials such as rubber is expected to provide new avenues for isolating machine vibrations or protection of buildings from earthquakes. And making a metawand, which is just a tapered metarod, that blocks all vibrations is just a matter of time.