Ultrasonic waves in liquids are interesting because the transmission of sound is closely related to the rate at which the liquid can recover from being compressed, dependent on the microscopic ordering in the liquid. At high enough frequencies the local atomic environment remains frozen on the passage of an acoustic wave, leading to a stiffer response. This phenomenon is known as structural relaxation.

Now we have used picosecond ultrasonics to monitor ultrasonic waves in liquid mercury up to 10 GHz (1010 Hz). Sound pulses are optically generated in a thin film of liquid Hg sandwiched between two sapphire plates.('Optical excitation and detection of picosecond acoustic pulses in liquid mercury,' O. B. Wright, B. Perrin, O. Matsuda and V. E. Gusev, Phys. Rev. B 78, 024303, 2008.) 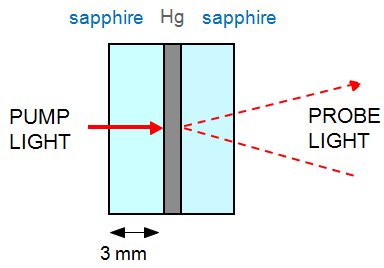 Diagram of the experiment performed. The liquid mercury is a film only 1 μm thick. 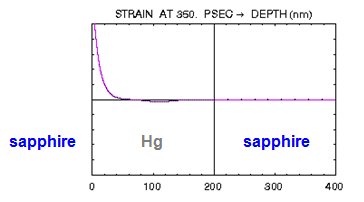 The strain pulse optically generated in the liquid mercury film bounces backwards and forwards, as shown in the simulation above for the example of a 200 nm film. To animate click the image (400 kB movie). (Sound velocity variations are not included in this simulation.)

When the strain pulse returns to the point of departure it produces a displacement of the interface and a strain-induced change in the refractive index of the mercury. These changes are detected by another ultrashort light pulse. 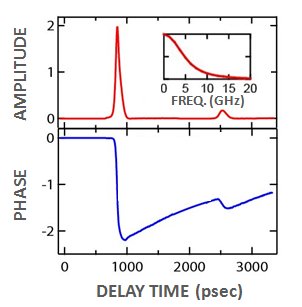 Results for the first and second echoes. The inset shows the frequency spectrum of the ultrasonic amplitude of the first echo.

By comparing the shape of the first and second echoes we could find the variation of the sound velocity and ultrasonic attenuation with frequency, and evidence for structural relaxation.

By clamping thinner films of liquids we should be able to extend these measurements up to higher frequencies. 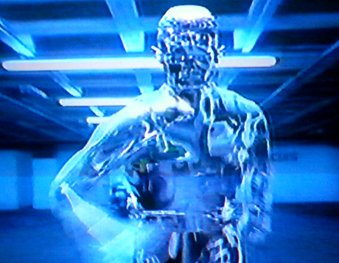 We may also be able in future to better understand the dynamics of liquid metal men such as the one in the movie "Terminator 2".