We use ultrashort light pulses of sub-picosecond duration (less than 10-12 s) to generate and detect extremely brief bursts of sound in solids. In this project we are concerned with sound that travels directly into the sample. This sound is longitudinally polarized: the atoms are made to vibrate in the same direction as the sound travels.

The figures show, in chronological order, how a picosecond sound pulse can be generated and detected in a thin film of metal or semiconductor.

An optical excitation pulse of duration less than 1 picosecond hits an opaque thin film surface. The optical spot is a few microns (10-6 m) in diameter, and typically heats the sample surface initially to a depth of about 20 nanometres (1 nanometre=10-9 m).

A sound pulse with a wavelength typically of about 50 nanometres (about 1/1000 of the thickness of a human hair) and frequency 100 gigahertz (1011 Hz - about 100,000 times higher in pitch than your ears can hear) travels into the film. The duration of this sound pulse is only 10 picoseconds.

The sound pulse is reflected from the interface between the film and the substrate.

We detect echoes as the sound reverberates inside the film. This is an animation of an acoustic strain pulse travelling in a thin film of polycrystalline chromium of thickness 200 nanometres. We use films that are typically 10 nanometres to 1 micron in thickness.

This is a plot of the measured optical phase variation for the above film. The horizontal axis is time. This graph was obtained by scanning the delay time between the optical excitation pulse (blue light) and the optical detection pulse (infrared light).

This technique is called the optical pump and probe technique (pump means excitation and probe means detection). From the time interval between echoes we can deduce the thickness of the film, provided that we know the sound velocity for longitudinal waves (about 5000 ms-1 for a typical metal or semiconductor).

The production of sound depends on a variety of mechanisms, such as the how the light knocks the electrons in the solid out of equilibrium, how these electrons move, and how they scatter from electrons or atoms. This scattering leads to the production of heat and sound through thermal expansion. By looking at the frequency, that is, the pitch of the sound pulse we can therefore study the fundamental interactions between the elementary excitations in the solid (electron-electron and electron-lattice couplings).

Take the noble metal gold for example. When you hit it with an ultrashort laser pulse you would expect it to produce an very high pitched 'ping' at 100 GHz (1011 Hz). However, because of the electron motion on ultrashort timescales, it actually produces a sound frequency ten times smaller. You might say it goes 'thud' rather than 'ping'. This is because in gold the electrons are weakly coupled to the lattice and can penetrate into the bulk of the material before they release their energy. (See 'Ultrafast nonequilibrium stress generation in gold and silver', O. B. Wright, Phys. Rev. B 49, 9985, 1994.)

In fact we have proved that the time required for energy release of the electrons in gold τE (< 1 ps) is related in a remarkably simple way to the characteristic times for electron-electron scattering τ0 and electron-phonon scattering τS : . (See 'Ultrafast nonequilibrium dynamics of electrons in metals', V. E. Gusev and O. B. Wright, Phys. Rev. B 57, 2878, 1998.)

We are also studying other transition metals to elucidate the sound generation mechanisms. In some transition metals such as chromium (see above) or nickel the electrons have a strong coupling to the lattice, and so we can produce 100 GHz 'pinging' easily, as demonstrated by the above data. (See 'Picosecond acoustic phonon pulse generation in nickel and chromium', T. Saito, O. Matsuda, and O. B. Wright, Phys. Rev. B 67, 205421, 2003) Such metallic thin films should prove useful in applications as very high frequency transducers for generating ultrasound.

Similar phenomena occur in semiconductor samples. In a crystal of gallium arsenide we have detected the 'thud' produced when the laser pulse hits the sample, just like in gold. (See 'Ultrafast carrier diffusion in gallium arsenide probed with picosecond acoustic pulses', O. B. Wright, B. Perrin, O. Matsuda, V. E. Gusev, Phys. Rev. B 64, 081202(R), 2001.)

This shows the thin slice of gallium arsenide that we used for this experiment, only 2.6 microns in thickness. 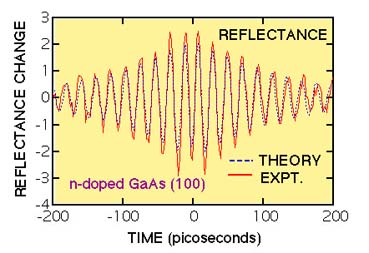 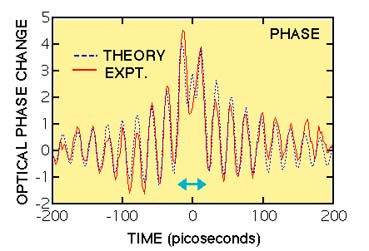 The red curves show the measured optical reflectance and phase variations for the first acoustic echo. The oscillations are caused by an interference effect in the detection process when the light reflected from the moving sound pulse combines with the light reflected from the sample surface. The actual duration of the acoustic strain pulse is shown by the light blue arrows, corresponding to the raised portion of the optical phase variation caused by surface motion.

The dotted blue curves show theoretical fits to the echo shapes that take into account the ultrafast electron motion. The electron motion determines the sound pulse duration (about 30 picoseconds) and frequency (about 15 GHz), as was the case for gold. But in gallium arsenide it is the electrons themselves that produce the most strain, rather than the thermal expansion. This is because in semiconductors the electrons get stuck above the band gap, and cannot relax quickly. (The band gap is an energy gap in which electron states are not allowed.)

We are also extending the technique to produce structures composed of minute layers: buried slices of semiconductor only a few tens of atoms thick, so-called quantum wells. These allow us to prevent ultrafast electron motion in the direction perpendicular to the layers, thus localising the sound pulse generation region and thereby producing extremely short bursts of sound with a frequency as high as one terahertz (1012 Hz). The frequency and intensity of the sound can be varied by tuning the laser wavelength. This research should lead to new methods for terahertz acoustic transduction and nanostructure evaluation. (See 'Acoustic phonon generation and detection in GaAs/Al0.3Ga0.7As quantum wells with picosecond laser pulses', O. Matsuda, T. Tachizaki, T. Fukui, J. J. Baumberg, and O. B. Wright, Phys. Rev. B 71, 115330-1-13 (2005))

More details are given in the List of publications.