The properties of mechanical contacts between solids depend on how their microscopically rough surfaces mesh on the nanoscale, and a physical understanding of the contact area is vital in engineering and biology.

We press a ceramic sphere of a few millimeters in diameter onto a chromium film of thickness 100 nm (1 nm=10-9 m) supported on a sapphire substrate. Upon absorption of a focused ultrashort laser pulse on its bottom surface, the film is heated extremely rapidly and expands, launching the sound and heat waves. A diagram of the apparatus is shown here.

These waves reach the intricate contact interface, made up of nanoscale bridges between the two surfaces, as shown on the right. The waves are then partially reflected and return to the bottom surface of the film.

Mapping the acoustic and thermal waves at the bottom surface with probe light pulses focused to a 2 micron spot allows these nanoscale bridges to be seen. 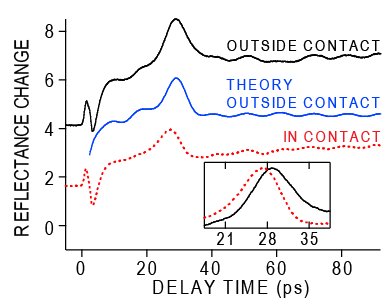 We find a significant decrease in the height of the acoustic echoes, shown above (at time t=28 ps), by an amount larger than predicted by simple theories of acoustic reflection. The echoes are also distorted in the contact region (see inset where echoes have been rescaled). We believe these effects are caused by the vibrations of the nanoscale bridges.

In the contact region the echoes arrive earlier, revealing nanometer-order deformations of the film.