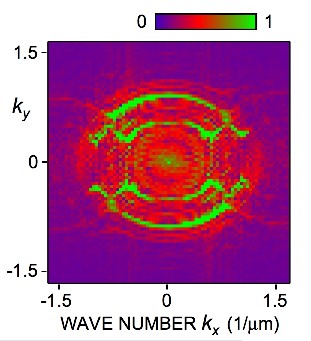 The evil eye is watching you. Eye-shaped band structure at a frequency of 534 MHz (in two-dimensional k-space obtained by Fourier transforming the data).

If we analyse a sequence of images by a process called Fourier transformation, it is possible to determine the constant-frequency surfaces — essentially maps of the different sound wavelengths (λx, λy) generated.

The above picture shows the 534 MHz constant-frequency surface. The horizontal and vertical axes correspond to wave numbers kx (=2π/λx) and ky (=2π/λy). This representation is called reciprocal space or k-space.